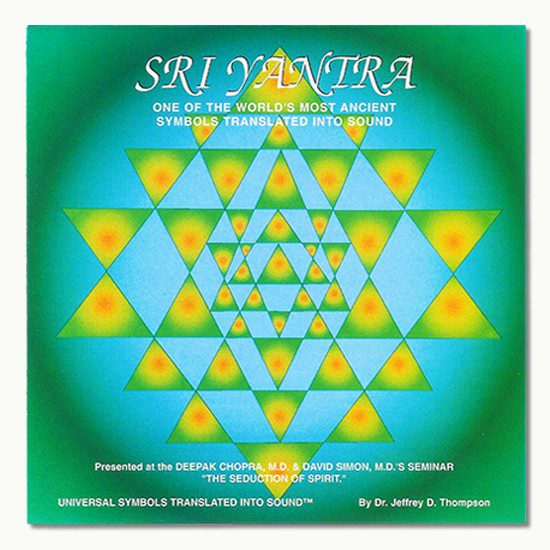 The SRI YANTRA consists of 9 triangles arranged very specifically and superimposed on top of one another.  Dr. Jeffrey Thompson has translated this ancient Mandela symbol into a Sonic Mandela mathematically in two different ways, corresponding to part 1 and part 2 of this CD.

This CD was created for the Deepak Chopra seven-day workshop "Seduction of Spirit" held in San Diego, California in 1994. Visual images of the Sri Yantra and its corresponding sound frequencies formed a 45-minute meditation experience as part of the seminar. The sound vibration patterns that are generated by the complex relationship of the many sounds of the Sri Yantra make this soundtrack a very powerful tool for reaching deep states of consciousness.

In each part of this CD, Dr. Thompson has used the circle around the triangular patterns of the Sri Yantra as a central reference point to which all of the triangles relate in distinct proportionate ratios. He took the essential element of the circle, PI, as the basic unit to which all the other ratios of the triangles could relate. Therefore, PI became a frequency vibration rate which, when doubled in value many times became 201.0624 cycles per second or Hz, which is a sound tone in the international tuning scale of G+43 cents. Cents are divisions of micro-tuning between notes on a piano keyboard. Each cent equals 1/100th division of sharp or flat between notes.

In track 1, Dr. Thompson took the circle as 360 degrees equaling the sound equivalent of PI raised by octaves to equal 201.0624 Hz.  He then calculated what one cent division equaled as a sound frequency. Then he converted each of the twenty-seven (27) angles of the nine (9) triangles which make up the Sri Yantra, into their corresponding sound frequency vibration rates and the associated musical tones with the exact micro-tuning accuracy of a single cent. Therefore, on track 1 you will hear the Sri Yantra assemble itself sonically one triangle tone at a time, starting with the frequency for the circle and ending with all twenty-seven (27) angles playing together. This produces an extremely complex pattern of relationships, the exact relationships you see as you look at the Sri Yantra Mandela pattern visually. This Audio Program is the sonic equivalent, accurate to 1 cent, of the beautiful Sri Yantra looked upon visually.

Track 2 of the Sri Yantra CD again uses the value of PI, raised by octaves to G+43 cents, as a baseline sound frequency.  In this track, Dr. Thompson calculated the area of the circle and then calculated the area of each of the nine (9) triangles. He then related the area of each triangle as a percentage proportion to the circle that enclosed it, making a ratio. Ratios between tones are what musical tuning is all about. The complex pattern of precisely tuned sound frequencies of all nine (9) triangles creates a sound field of multiple levels of pulses created by the acoustic physics principles of "The Critical Bandwidth". The tuning of the precise frequencies of each of the nine (9) triangles of the Sri Yantra all fall exactly within a range called the "Critical Bandwidth". This is when two tones are tuned within 18% of one another. In this range of tuning, the brain cannot distinguish two separate tones, but hears a single tone with a pulse within it that is created by the difference between the two tones. This is the key element in the high-tech methods Dr. Thompson developed in 1982 to cause a brainwave entrainment response called "Binaural Beats" - the mixing of two precisely tuned tones to make a pulse which entrains brainwaves into altered states of consciousness. The Sri Yantra accomplishes this brainwave entrainment phenomenon in a most sophisticated way. The symbol is countless thousands of years old. The Sonic Sri Yantra is powerful, beautiful and is capable of giving its receptive listeners an experience not easily forgotten. It, like so many of Dr. Thompson's creations, is truly a Masterpiece of Art and Science.

In both track 1 and track 2 of this CD, Dr. Thompson has played the complete Sri Yantra through a series of seven octaves. You will hear the Sri Yantra begin a mix of complex low frequency vibrations, which continually double in frequency every four minutes and become higher and higher, leading one upward. With headphones, you will be able to feel the Sri Yantra begin as a sound vibration in your body and eventually exit through the top of your head.

The sounds on this CD have been processed with special 3-D recording techniques, so headphones or good stereo separation are essential for best results. This CD is best used sitting in a meditation posture with an erect spine, with eyes closed and lights dim. You may also wish to listen to it while meditating when gazing at a picture of the Sri Yantra.

All content and media on the our Website is created and published online for informational purposes only. It is not intended to be a substitute for professional medical advice and should not be relied on as health or personal advice.

Always seek the guidance of your doctor or other qualified health professional with any questions you may have regarding your health or a medical condition. Never disregard the advice of a medical professional, or delay in seeking it because of something you have read on this Website.

If you think you may have a medical emergency, call your doctor, go to the nearest hospital emergency department, or call the emergency services immediately. If you choose to rely on any information provided by Your Health, you do so solely at your own risk.

If you wish to seek clarification on the above matters please don’t hesitate to get in touch with Your Health.

There are no reviews yet.

Only logged in customers who have purchased this product may leave a review.

I have been in practice for 40 years. I began practice in 1980 in the largest Holistic Health Center in Virginia. This is where I began my exploration work with Sound as a healing tool. This is also the period when I produced my first album of healing music. This healing work with sound evolved over the next 8 years until the results I was seeing were more powerful than all the techniques we were using in the clinic combined. In 1988 I sold my practice and my house in Virginia and moved to San Diego to establish a big research center/clinic here to explore this sound work full-time: The Center for Neuroacoustic Research. It is from this research with patients over the decades that a host of new discoveries and innovations have been possible that resulted in a number of patents, discoveries of new brainwave patterns in the brain, and the invention new high-tech devices for measuring the core system of control in the brain: the ANS: Autonomic Nervous System (Sympathetic/Parasympathetic).

Over all these decades of direct work clinically with patients, I have become more and more convinced over time that Stress is the ultimate cause of disease. De-stressing this core control system in the brain (the ANS) and returning it to a normal functioning state (Homeostasis) where the system goes into a zero-stress state is the key to healing many conditions. Healing comes from the inside, from the natural organization of systems in the body. Healing does not come from pills or drugs or from doctors.

“God does the Healing, the doctor collects the bill” so to speak.

Imbalances in various systems of the body – organs, glands, structure, brain, meridians, Chakras, etc., is not their fault. We know from standard physiology that these systems only do what “central command” in the brain, tells them to do. The operating area in the brain where this takes place is a series of tiny organelles in the Hypothalamus in the center of the brain. This is the origin of the Sympathetic/Parasympathetic branches of the ANS: The Autonomic Nervous System. The ANS is the Automatic functioning “Biocomputer” program that monitors and coordinates all the systems in the body and organizes and directs them all to synchronize and coordinates their function so we can be healthy and alive. Within this system, the Parasympathetic dives and controls the system. A fight/Flight stress response cause the Sympathetic to turn on, but this is not actually what happens: the Parasympathetic turns itself OFF and the Sympathetic turns on by default…because the Parasympathetic controls the system. The 10th cranial nerve, The VAGUS nerve is the heart of the Parasympathetic control system of the body. Our core work with Sound healing over the decades has been stimulation of the VAGUS Nerve with precisely tuned sound frequencies to re-balance the master control system in the brain: The Autonomic Nervous System.

If this Autonomic System begins to get unbalances and uncoordinated, then every system it controls will begin to also falter and drift out of its normal, coordinated function. This pops up alarms in the body to let us know something is wrong…we call these “symptoms”. This is a warning to us that we should start looking into the body to find out why these symptoms are arising. Silencing these symptoms must not be the only treatment, we must dig deeper and fix the cause. In our research, the ultimate cause is the master control system in the brain that controls all systems in the body: The Autonomic Nervous System.

Over the years we developed a patented system for viewing the Sympathetic/Parasympathetic branches of the ANS LIVE on a computer screen. With a simple test, we can see if it is functioning normally or not. With most patients we see, the ANS is not functioning normally, it tends to be stuck in “Fight or Fight” mode with the Sympathetic stuck in the “ON” position. This means the body is burning up all it’s resources and not going about its daily rebuild and repair duties because the chronic stress program is pulling all the body’s resources to fight for its life and in many cases, this has been going on FOR DECADES.

Our innovation is using a precisely tuned sound frequency, played into the body through a patented “Sound Table” and through headphones, that causes the Autonomic Nervous System to break this vicious cycle and return to its Zero-Stress State of Homeostasis….which is a prerequisite for healing to begin.

Based on our decades of clinical research with thousands of patients, we have created over the years an entire catalog of generic soundtrack recordings on CD and Downloads for addressing the core stress handling system of the body, which you can see in our “Sound Store”. Instituting a regular program of listening to these soundtracks for 30 minutes a day with headphones can help break the vicious cycle of stress in your own life and help you to begin the process of deep level regeneration of your health.

Join our members list to receive updates about our Sound Store and special deals only available via email.

Welcome to the movement! Thanks for subscribing.